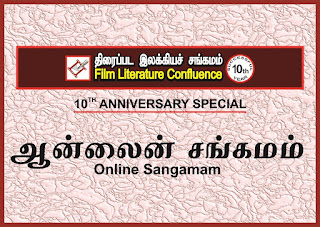 This is the tenth year for our Film Literature Confluence. We are conducting programs of films and film related topics for the last ten years continuously. Our confluence, started to unite the film and literary fields together and to make a friendship circle among the film fraternity, is successfully conducting the programs. We are the pioneers in a few things.

At that stage, only the films got awards or praised as a good art film only will be felicitated in functions. We are the first to conduct felicitation or review meets on two films selected as good films by friends, one art film and one commercial film the totals films released every month. After that see so many institutes, colleges and groups conducting meets on successful films.

We had decided to conduct the tenth anniversary for our confluence, really on a day in the last February or March. We had made all arrangements for that also.

We planned to start monthly meets on novels also like meets on films in the anniversary meet. As to begin the meets in that function, we invited novels published in the last year from the writers. We had started the works to select the novels for the function. For that purpose, we got recommendations from our friends too.

But because of the Corona lockdown, all the plan has to be postponed. And now we found no chance to conduct the meet in the near future of in this year. There in no chance to conduct not only the anniversary but also the monthly meets in halls. We don’t know when it can be resumed like the past in the next year also.

In this time, we see some of our friends and groups conducting meets through net work like zoom app. We think to bring our confluence also in that style to the next level. The Online Sangamam is the result of that thought.

We think to do something different from the usual style, and decided to get videos on a few topics from all the friends through email and to upload in our channel. And we had fixed the timetable of programs for this month also.

But there are some hindrances, like doubts and confusions to conduct the meets. There is doubt that it will also become an usual meet. Because, we have to invite chief guests, have to make them speak on the topics, film or novel, and have to upload only those videos. But, when starting the Online Sangamam in a new style, we have an idea to make all friends to talk about the topic and to avoid usual speeches of chief guests. We had made arrangements for that also.

But, there is a problem again. Usually so many films will be released every month and we can select two films from that list and can conduct felicitation or review meets. Like that, novels also will be published in many numbers and we select one or two to speak. But for the time being, only a few films are releasing in the site like OTT platforms. And only one or two books are releasing in the platforms like Kindle. We think it will not be fair to select films or novels from this list.  So decided to postpone this programs also for the time being.

First let the lockdown is over, let the full relaxations come, and we can conduct the programs regularly when the films and books released as usual. Now, as a new attempt in the Online Sangamam, as a need of this period, decided to conduct seminar series on film and literature related topics.

And we planning to start a seminar series on the topic ‘Neegalum Cinema Etukkalaam’ (You Can Make Movies) now.

Already I had uploaded many small videos in this site itself, and done it more in this lockdown period. Uploaded many videos as stories, lessons or special videos. And I shared one or two among those videos to my friends and request their opinions and suggestions. And decided to change everything accordingly. Now I had decided to everything freshly as new ones. As a part of that, this seminar series will be also uploaded.

As already noted, Online Sangamam is a new attempt, and I would like to upload opinions of all friends also in the video format. This will be chance or platform for that purpose. Friends should send their videos through the email ‘filmfriendship@gmail.com’ only, and make them within the duration of five minutes. From the videos, selected ones will be published here.

If anybody could not make videos and like to write, they can type, not more than two pages, and can send. Every post will be published in our filmfriendship.com site in writing.

When sending your opinions, you should remind one thing. I am telling it now only to avoid any problem in the future. Send your opinions by keeping in mind that, ‘the selected posts only will be published here, and the confluence has the right to shorten, compile with other opinions, and to print when get chance in future. Please send through email only.

Now let us enter into the seminar series.

Posted by Film Literature confluence at 11:22