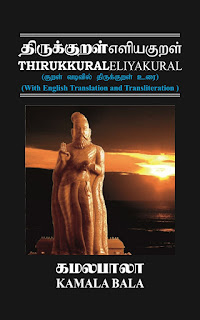 I was born in Arakachi, a small village of Nilgiris in Tamilnadu. But, because of the family circumstances, I was brought up in Kerala where I completed my school and higher education. And it was in Malayalam.

Though my mother tongue is Malayalam, my grandmother tongue is Thamizh (Because Thamizh is mother of Malayalam). More than that I was brought up in a village near the border of Thamizhnadu and Kerala. So, I spent more time to play in the lap of Thamizh than to study lessons in Malayalam. Thus I learn to read, write and speak Thamizh, to an extent.

The writers of books and journals in Thamizh were my teachers for Thamizh. I like Thamizh very much. And, naturally I like Thirukkural, one of the greatest literary work in Thamizh. To understand and study Thirukkural I approached my friends, who studied in Thamizh medium. I was surprised to know that they also needed the help of the explation of those couplets in school books or other explanations of some other authors to tell the meaning of the kurals.  So, I didn’t like to disturb my friends more and start to read that books purchased and hired from the libraries.

I have written simple explanation for every couplets in Thamizh as I could understand. But I found no attraction or curiosity in those explanations to remember or by heart.  ‘Eliyakural’ was born out that inability of myself to memorize the Thirukkuural. I have tried to retain the ‘Thirukkural’ style by writing the ‘Eliyakural’ in the same couplet format.

I have tried  to explain these couplets by referring and reading some similar works by various other authors, so that the students as well as others, who love Thamizh can easily understand this great work of Thamizh literature.

And I transliterated both Thirukkural and Eliyakural as the readers could read and understand the original versions of both with the Tamil pronunciation.

I would like to thank Mrs Latha Ambat (wife of cinematographer Mr.Madhu Ambat) for her kind co-operation in this process of correcting the translations.

Naturally some limitations are there to transliterate all the pronunciations in Thamizh to English. So I request the readers to bear with new style I adopted here for transliteration.

This is my first attempt in English. I hope you all, loving not only Thamizh but also English, will accept this simple attempt and encourage me.

(Here I used a new way of transliteration with a list of special alphabets to replace the pronunciation of vowels in Tamil.

Note: Only 25 selected chapters are here. For all chapters (133) read the book in Kindle and Print version.

Posted by Film Literature confluence at 17:17