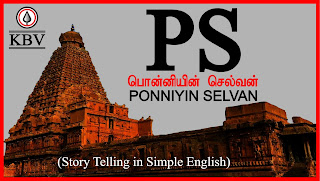 Whenever I tell that ‘I am telling the novel Ponniyin Selvan as a story in my channel, I wrote screenplay for that, and I am trying to make it as a film etc.,’ some of my friends will always ask “Can you tell its synopsis?”

This is the most popular novel in Tamil written by Mr.Kalki, spread over five parts and it fifth part itself equal to two parts. It is very hard to tell this big novel in short as a synopsis. Because, the attraction and beauty of the novel will not be in the synopsis. Everything cannot be told in short.

And according to my opinion, it should not be told like that. Still, I am trying it tell as the friends requested. And I am going to tell it in Tamil as many friends asked for that. And I am transcribing and posting it as a text here.

This story was written as it happened thousand years ago. This is an imaginary story made on the basis of some incidents in the life of Rajaraja Chozhar, who construced the Thanjavur big temple.

We cant differentiate which are true and which are fiction, which are happened and which are imaginary. That is the talent of Mr.Kalki, The speciality of his writing style.

The story is happening in the period of the rule of Sundara Chozhar. He is very popular one in the dynasty of Imperial Chozhas, began with Vijayalaya Chozhar. He had three children.

Aditha Karikalan send two letters (palm leaves) by Vanthiyathevan. One letter to the Emperor in Thanjavur and the second on to his sister Kunthavai in Pahazhaiyaarai.

Adithan feel that something unusual is happening in the country and hearing something that should not be heard. And he wrote these letters only because he decided to know the truth.

Adithan send him only with some advices like “On the way you should not interfere with any others business and you should not try to prove your bravery and sincerity, should not go and face any problems.. You should not reveal yourself and go and come back secretly.

And the story started from that journey of Vanthiyathevan. When Vanthiyathevan started the journey to Thanjavur, he has to stay on the way in Kadambur for one night. In that night, he meet his old friend Kanthamaran, son of Kadambur Sambuvaraiyar and stayed in his palace. The Vanthiyathevan got a chance to watch a secret meeting there.

Younger Pazhuvettarayar is the in charge of the protection of Thanjavur fort and palaces. The subordinate kings and officers met together in the Kadambur palace under the leadership of Periya Pazhuvettarayar.  They decided to leave aside Adithan and to crown Maduranthakan, son of Kantarathithar, who is the uncle of Sundara Chozhar.

In reality, Maduranthakan have more right to crown than Adithan. But his mother, Periya Piratti brought up him in the spiritual way. He lived in that way, even up to a few months back. But he started to like politics and power in the recent days. Pazhuvettarayar and team decided to make him as the next king.

Vanthiyathevan understanding all those things, started his journey to Thanjavur. He met many persons on the way and made a few as his friends and some others as enemies. He met Azhvarkatiyan, a spy. He is an assistant of Anirudha Brhmarayar, the prime minister of Chozha Empire. As a vaishnavite, he will go to the temples, collect all the news from all over the country and conveyed them to Prime minister, Periya Piratti and Kunthavai. He doubt Vanthiyathevan as a spy and Vanthiyathevan doubt Azhvarkatiyan.

Vanthiyathevan cleverly cheat Chinna Pazhuhvettarayar and meet the Emperor and hand over the letter. Then caught by Chinna Pazhuvttarayar. Vanthiyathevan then escaped from there and met Nandhini. Nandhini is belong to the group of Apathuthavikal, the body guard team of Madurai Pandyas.

Chozhas had killed the Pandya king Veerapandian. The apathuthavikal are trying to bring back the Pandya dynasty. Nandhini is helping that group. And she likes to appoint Vanthiyathevan as her personal assistant. But he told that he promised Adithan already and going to become personal assistant of Kunthavai, Then he escaped from that place also.

Vanthiyathevan meet Kunthavai in Pazhayaarai and hand over the letter. He already met Kunthavai once on the way earlier, without knowing that she was Kunthavai. And now he meet her again and start to love her. She also liked him. She understand all the matters happened.

She know that Nandhini and team trying to destroy the Chozha family at once. Kunthavai wanted to bring Adithan and Arunmozhi to a place as they can be in a safe position. So she send a letter by Vanthiyathevan and asked him to bring Arunmozhi. So, Vanthiyathevan started the journey from Pazhayaarai to Srilanka.

He started the journey with a son of a rural doctor as to bring herbal medicines for the treatment of the emperor. They came to Kodikkarai. In Kodikkarai, they meet Poonkuzhali. She is a daughter of a priest there. And she is very daring and knows boat riding. With her help, Vanthiyathevan started his journey to Srilanka through sea.

Azhvarkatiyan also came there. The captain of the Chozha army meet them both Vanthiyathevan and Azhvarkatiyan. Then as he advised, both of them go to meet Arunmozhi. Arunmozhi tell about the incidents he faced in his life. A lady saved him whenever he was in danger.

These three meet that lady, old lady. She is Mandakini and she look alike Nandhini. She is a deaf and dumb and so she told about her relationship with Sundara Chozhar in the younger age through paintings. Arunmozhi and friends understand what happened in the life of Sundara Chozhar.

At the same time, Sundara Chozhar tells about that directly to his daughter Kunthavai. He believed that her soul is torturing him, and that thought is making him ill.

In this situation, Pazhuvettarayars send men to arrest Arunmozhi, with the consent of the emperor itself. So Arunmozhi came forward as he could be arrested. On the way he with the friends came to know about the sea robbers who attacked the army of Chozhas in Srilanka. They saw a ship of the robbers in a distance.

Poonkuzhali saved both of them and bring back to Kodikkarai. Arunmozhi affected by a disease. So to send him for treatment in the hospital of Budha Bikshus, Poonkuzhali take him to Nagapattinam. Chenthan Amudhan, who came there accompanied her in that journey. She is cousin of Chenthan and he loved her.

Vanthiyathevan send them to Nagapattinam and start his journey again to Pazhayaarai. And have to meet Nandhini again on the way. Everywhere, everyone meet Nandhini, had been surrendered to her. Including Parthipendran, the close friend of Adithan. But Vanthiyathevan escaped from her trap. She respects Vanthiyathevan by seeing his talent and boldness.

Vanthiyathevan escaped from there, reached Pazhayaarai and meet Kunthavai. They understand what is the plan of Nandhini and team. They know that Nandhini and team trying to destroy the Chozha family at once.

Kunthavai believed that Nndhini might be the daughter of Sundara Chozhar. Vanthiyathevan and Arunmozhi also had believed the same. Nandhini and Adithan were lovers in the younger age. Because of fate, they couldn’t join together at that time.

Adithan searched for Veerapandian in the past war and ready to kill him. At that time Nandhini begged in front of Adithan for his life. Only because of that, Adithan got angrier and cut the neck of Veerapandian. From that day, Nandhini want to take revenge on Adithan and working for that.

Knowing all these things, Kunthavai wanted to block Nandhini from meeting with Adithan and so send Vanthiyathevan for that. Because Kunthavai got the news that Adithan started to Kadambur and that also because Nandhini invited!

So Vanthiyathevan and Azhvarkatiyan started the journey from Pazhayaarai to Kanchi. But they saw Adithan and team coming on the way itself. Adithan is a stubborn man. He will not go back if started anything. So he continued his journey to Kadambur. As there is no other way, Vanthiyathevan also continue the journey with him.

‘On a same day, should kill Adithan in Kadambur, should kill Sundara Chozhar in Thanjavur and should kill Arunmozhi in Srilanka..’ That was the plan of Nandhini and team.

Because of some situations, Arunmozhi have to reveal himself and have to start his journey from Nagapattinam to Thanjavur. Because of some other reasons Pazuvettaryar came to know the truth. He came to Kadambur palace. Vanthiyathevan was trying to save Adithan by all means.

At the same time, in Thanjavur, Sundara Chozhar had been attacked but saved by Mandakini. And she lost her life. Arunmozhi escaped cleverly from the persons came to kill him. He came to Thanjavur. And on the way itself, he meet Poonkuzhali, Kunthavai and Vanathi. They together came to the Thanjavur palace secretely.

All decided to crown Arunmozhi as the emperor.. On the ceremony day, Vanthiyathevan and Arunmozhi played a drama and crowned Chenthan Amudhan as the emperor.. That means. they crowned real Maduranthakan.. Pazhuvettarayar tell the truth and try to suicide.. Nandhini escaped from there. Nandhini and team bring Pazhuvttarayar also with them.. The daughter of Chinna Pazhuvttarayar is the wife of old Maduranthakan. He escaped from Thanjavur. Chinna pazhuvettarayar go to search him..

Kalki didn’t tell a finishing for each character or incident as in a climax of a film. He believe that it cant be done as it is a real story. So he explained what happened to the characters and how the things finished etc. in his end note.

If you want to know more about the story, you can read the full content in so many sites. So many persons told the story in youtube and you can watch them. We are also telling it in short as chapters. You can watch that also.

Please comment your opinions and suggestions. Do not forget to subscribe the channel (KBV Reels) and watch it continuously. If you want to ask any doubts, you can ask me here. I will try my best to answer them.

Posted by Film Literature confluence at 15:11