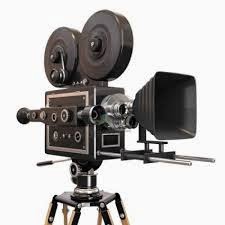 A thought arisd in the mind of Dr. Jules Marey, who lived in France in 1882. He bought a gun for hunting. And he planned to convert it to a movie camera. He fiexed a lence the end of the barrel. Change the socket for bullets behind the barrel as black room to keep the film (plate) without exposed to light. He make a plate to receive the picture and a machine with gears to move may time. Fix it to the trigger of the gun. He arranged like the plate role will move and catch the pictures step by step when the trigger on by the finger.
He couldn’t take sixteen pictures per second
with this camera. It had only a speed to shoot twelve frames per second. Still it is regarded as a milestone in the invention of movie camera. Using this camera, Dr.Marey take photos of public in the 1889 Paris festival and he show this pictures to the public. That is not moving like natural. Eventhough it is not done with quality, it is the first film making. Only to remember the filming with the ‘Shooting-Gun’, even today film capturing by camera is calling as ‘shooting’.
An assistant of Dr.Marey, Mr.Georges Demani made many improvisations in that shooting gun. Still can’t shoot more than twelve frames per second. He hand ove the camera to Mr.Coment in 1893.
Thomas Alva Edison was doing many experiments in light, photos etc. He tried to invent a movie camera with his assistant K.L.Dickson. The achievements of Mr.Mybridge and the shooting gun of Dr.Marey made an impact in his mind. The camera of Marey can shoot only twelve frames per second. But to make the movie to see natural the pictures must be shoot sixteen frmes per second. That Edison know well.
He plan to invent a camera and a projector to show the movie shooted. Edison and Dickson failed in their attempt. They couldn’t make a camera that shoots sisteen frames per second. Still Edison continue his experiments.
In that period, that is 1888- 1889 years, George Eastman and Dr.Hanny Paul Goodwin invented celluloid film and start to market. At that time the width of that film was lengthier as our small finger.
Edison bought the celluloid and did experiments on it. He found that shooting with that film is easier and sharp. He change the camera a to use the film. The camera to shoot sixteen frames per second was ready.
On the day24 the Aughust 1891, Edison applied for the patent right of that camera and got the patent on 31st August 1891.
Edison shot the dance movements of ladies with hs camera. Shot the performances in a circus company with their permission. He made Mr.James K Gorbet, who was famous in that time in boxing, to fight with another and shot the fight. Thus he shot movements that public like very much. But he couldn’t make a projector to show the movies on a screen in fornt of the public. He invent an instrument to run the movie inside a box as only one man at once can see t through a lense. he named the instrument as ‘Kinetoscope’.
‘Kinema’ is a Greek word and it means movement, displacement or shaking. ‘Kinema’ became ‘Cinema’ in English. He name Kinetoscope based on the word ‘Kinema’.
In that time, C.Francis Jenkins, who worked as a stenographer in American government  invent a camera to shoot sixteen frames per second and projector to show it.
In that period, in many countries in the world a light called as ‘magic lantern’ was used to show the still photos on screen for entertainment. In that the pictures will be seen in round shape. Jenkins tried to show the movie using the same magic lantern.
The same C.Francis Jenkinson himself invent videography in 1925 in America. In 1894, he invite his close friends to his home to show the cinema. Friends got together. A white screen was fixed on a side of the hall. A projector was in the opposite side. Friends wait and watch all in wonder. Jenkins told them “I going to show cinema about a dancer Anna Belri” and close the doors and off the lights. A beautiful lady danced on the screen. Friends shocked to see that. That film runs only for one minute. Then Jenkins on the lights in the hall. Friends dind believe him. They think that he hide a lady in the darkness and make to dance.  A few think that was a magic. Totally they blame him as a cheater and left him.
Even it was shown in front of a few friends, that was the real movie shown before a public for the first time. But the history didn’t accept that as the first film in the world. Because, this event was not informed formally to the press reporters or recorded.
Most of the friends saw that show didn’t understand the achievement that Jenkinson made and criticize him except one person. That was Thomas Harward. He was a friend of Thomas Alva Edison. Harward asked Jenkoson “why don’t you make some modifications in the projector”. Jenkinson replied “I had no mone fo that”. Harward agree to buy the projector, if he ready to give. As being in poverty, Jenkonson agreed to sell. Harward purchased the the instrument and its rights just for 2500 dollars and run to Edison. Thomas Alva Edison wondered to see the instrument.They planned to do some modifications and show the first movie in world to the public. But, Lumiere brothers overtook them.
Lumiere brothers shot a scene that the labours coming out of a factory and show it as a movie to the public in a dark room. Even it run for a very few seconds, it become the first film in the world.


Lumiere borthers shot many small films like this and shown in front of the public in many countries. Among that, on film that is a scene of a train coming to a platform become very popular. That attract many to the film field.
Posted by Film Literature confluence at 14:26