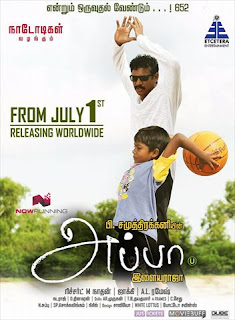 The producer cum director Samuthrakani selected a good social message to tell the audience in his latest film ‘Appa’. In recent days, he used to tell many messages to the society through all the films he acted. So it is not a surprise to see him in a full pledged character of an advisor in his own production.
Samuthrakani did a good job as a producer. He brought suitable actors and technicians on the board to make this film a watchable one. There is no doubt in it. And the director Samuthrakani had brilliantly co-ordinate all these talents perfectly to make it a success.
The artists and technicians had done their job very well. All the actors in the character of all children and their parents have to be mentioned in this regard specially. All these factors made this film a good one. Well done Mr Producer, Mr Writer and Director Samuthrakani!
In this film, the director is telling about a social issue related to the school children and their parenting. And it dealt about everything about the method of child birth (delivery) to the method education, especially about a side effect of the current private school educational system.
The director explained some truth regarding to this issue very boldly and convincingly. We can see many examples for that. They are many in number, so we can avoid mentioning those now and let the viewers may find it on the screen.
Watching this film sincerely, I think the director had forgotten that he was making a feature film! Especially in the first half, all the viewers are feeling like they are sitting in front of a doctor for counseling about parenting.
The director himself is acting in the main role and he is preaching from the first scene in which he was introduced. Of course, the director had mentioned in a dialogue that, that is his characterization. A character, Thambi Ramayya, who is the second lead in the story himself is running away from his neigbour house. But the viewers had no way to run away from the theatre. (Because they paid for the ticket!)
Only from the scene in which the news about the suicide of a boy came, really the film got started with the pace, up to the scene in which the doctor (Sasikumar) came. (Here Sasikumar started to preach instead of Samuthrakani). The film seems really a good, engaging one in this portion. Only for that gripping script and good work in this portion, the viewers have to bear all other nonsense in the film.
That good portion is making the viewers to forget all those flaws. That is the real success of the director in this film.
As mentioned earlier, preaching and convincing is the characterization of Samuthrakani’s role, and it is well made. As per the story, this characterization is not started from the birth of his child. And surely there might be many months from marriage to the child birth. So, he might preach and convinced his wife.
For example, he convinced his wife for an old method of delivery. (Some dialogues are there to justify it as the brothers scolding Samuthrakani.) He thought it as a novel idea. But he was walking outside the house when his wife is struggling inside for the delivery, as usual in all old films. Is it the revolutionary idea? 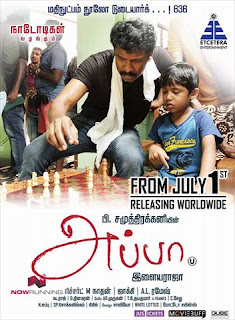 Posted by Film Literature confluence at 15:52

Email ThisBlogThis!Share to TwitterShare to FacebookShare to Pinterest
Labels: Filmview