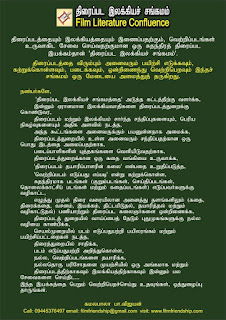 The Film Literature Confluence is an Independent Film Movement, leading to unite film and literature fields together and serving to make successful movies.
This confluence is giving a platform for all film lovers to practice, to learn, to create and to win together.
Dear friends,
To develop ‘Film Literature Confluence’ to the next level,
To bring more literary people to the film field,
To conduct more meetings and bigger events on film and literature,
To make the meets useful for one and all,
To establish a common meeting place for all film people,
To publish the books of creators,
To make a story bank in the film field,
To prove that ‘Cinema is the Art of Producers’,
To learn ‘How to make Hit movies’,
To guide Independent Film Makers (Short films, Documentaries, Tele films and Feature films),
To co-ordinate film makers in all areas from script to screen (Story, Screenplay, Dialogues, Direction, Planning, Production and Marketing),
To show the right way for the newcomers, who are searching for a chance in the film field,
To conduct seminars and workshops on practical film making,
To achieve in the film field,
To know about film making,
To produce good and hit films,
To be a part of a good experimental attempt and
To do many more service for film and literature…
Please help and co-operate by making this movement a great success.