The film ‘Bahubali 1 and 2’ made in Telugu by Rajamouli totally shaken the Indian film field. Now, nobody can avoid comparing to these films when refer any big budget film. Many creators and producers started to take big budget films following the success of Bahubali.

There is news that ‘Randamoozham (Mahabaharatham)’ with Mohanlal as lead actor is going to be made in Malayalam in 1000 crore budget. The ‘Sangamithra had been started in Tamil. ‘Enthiran 2.0’ is going to be released soon. If it become hit, the number of big budget films will be increased more.

When talking about the big budget films like this, always a name will be rised in the minds of Tamil fans, that is the ‘Ponniyin Selvan’. The question rising as ‘Why this subject is not made in a grandeur manner?’ is usual.

This attempt is the answer for that question. This decision is not taken in a single day.. This is a plan derived from the thoughts of many years. This is the compulsion of the time. More details about this will be in the next posts… 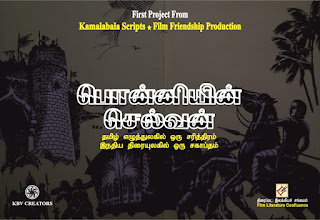 Posted by Film Literature confluence at 09:02